I looked at the astrological compatibility of the final 6 Love is Blind couples and the results are more disappointing than Kenny and Kelly's wedding.

Astrology doesn’t care what you look like or how old you are; astrology is just here to give you the facts (whether or not they're what you want to hear.)

Partaking in a "social experiment" (ploy to keep Nick Lachey's career afloat), the final 6 couples on 'Love is Blind' chose their fiancés after 10 days of speed dating in “pods,” in which they could converse, but not see each other. Some of the couples lasted and some of them didn’t, answering the question, is love truly blind? But the more important question is, how compatible are the participants to their fiancés and the other contestants?

67% of the final six men are water signs

Emotional, intense, and intuitive, water signs make great partners. The men on the show live up to the water sign stereotype by being emotionally supportive, blindly committed, and moody. This show definitely favors those who lead with their hearts and not their heads!

67% of the final six women are fire signs

Amber and GiGi are born on April 3rd (today), which also happens to be my birthday! Happy birthday to us!

The women of this show really brought the fire this season. They were bold, loud, and assertive. They demanded respect, asked for what they wanted, and started some pretty entertaining arguments.

Having so many fiery women on the show means that there was the possibility for some fire/water matchups. As a fire sign married to a water sign, I approve. I guess fire and water make steam…

There were ZERO earth signs in the final 12, and only 1 air sign

How compatible are the final six couples?

I have so many feelings about Mark and Jessica being the most astrologically compatible couple on this show. If this doesn’t prove that love isn’t blind, I don’t know what will.

While astrological compatibility can show you where your strengths and weaknesses are as a couple, it can’t always predict the success of your relationship. You may choose a partner who challenges you and pushes you to compromise OR you may choose someone who naturally understands you and with whom you have an easy relationship.

How many couples stayed together?

These results are surprisingly not bad with 50% of the couples still together in some capacity.

Are the Final Twelve More Compatible with Other Contestants Than the One They Chose?

In most cases yes… so if you were thinking about getting engaged after 10 days of talking to each other behind a wall, you should probably reconsider.

Carlton is More Compatible With Lauren Than Diamond

Cameron is More Compatible With Kelly and GiGi Than Lauren

Matt is More Compatible with Jess Than Amber

Damian is More Compatible With Every Other Woman Than GiGi

Kenny is More Compatible with Amber Than Kelly

Lauren is More Compatible with Carlton Than Cameron

She also has the same percentage of compatibility with Matt and Kenny as she does with Cameron. Lauren came to win.

Amber is More Compatible with Kenny Than Matt

She has the same percentage of compatibility with Carlton as she does with Matt. Funny how Amber was the confident one in the relationship, because girlfriend had other options.

GiGi is More Compatible with Every Other Man Than Damian

Kelly is More Compatible with Cameron Than Kenny

Did Anyone Choose Their Most Compatible Option?

Mark, Jess, and Diamond did!

Matt kind of did as there was only a 1% difference in compatibility between Jess and Amber.

Unfortunately for Diamond, Carlton was more compatible with Lauren than her.

Who is the Most Compatible Couple (Who Actually Chose Each Other)?

Mark and Jess. These two obviously had a connection in the pods, but Jess couldn’t get over their age difference and her lack of attraction to Mark.

Who Would Have Been the Most Compatible Couple?

Kenny and Amber at 91% compatibility!! We need a do-over because I would love to see this relationship play out.

Who is the Least Compatible Couple?

Damian and Gigi. Between the explosive fights and differing priorities, I’m surprised these two got back together. Guys, call me for your chart, I can help ;).

Who Would Have Been the Least Compatible?

Carlton and Kelly. I guess we dodged a bullet with this one!

What have we learned?

Is love blind? We might not have gotten an answer from the show, but one thing we know for sure is...

Who was your favorite couple on the show? Would you participate in the Love is Blind experiment?

I had so many feelings while watching Tiger King… shock, sadness, suspicion, anger, and amusement, just to name a few. But most importantly I wanted to know when these crazy people's birthdays are! 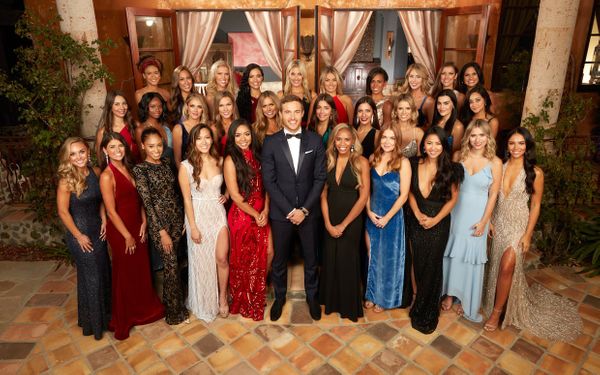 I researched the last 12 seasons of the bachelor and wrote the most dramatic blog post ever.via GIPHY This was by far the hardest post I have ever written, but man was