I had so many feelings while watching Tiger King… shock, sadness, suspicion, anger, and amusement, just to name a few. But most importantly I wanted to know when these crazy people's birthdays are! So I looked at all of the major character’s charts to get some insight into who they are, why they do what they do, and why they hate each other so much. Here's what I found...

*Quick side note- I’m mostly looking at Sun/Moon/Mercury/Venus/Mars placements as those are the ones that have the biggest impact on our personalities, our reactions, our actions, and our motivations!

These three lunatics actually have a lot in common! They are all water signs with a lot of water and air placements that promote internal conflict.

Let’s talk about the water/air conflict:

Having so many water and air signs together in one chart is enough to drive a person crazy. You’re constantly being pulled in different directions, you’re never sure whether to trust your heart or your head, and you’re frequently misunderstood by others. It makes sense that these three men have such a passion for animals, and that their passion went awry. They're emotionally volatile, they flip flop on their priorities, and they all have extremely complicated romantic relationships.

A breakdown of each person’s most dominant traits as indicated by their charts:

ILove To Party And Have Fun Celebrate GIF from Ilovetopartyandhavefun GIFs

Astrology Explains Joe and Carole’s Rivalry On A Deeper Level

I don’t think I’ve ever seen a rivalry this passionate before. These people TRULY had it out for each other, even though they’ve never actually met in person. Did they hate each other only because of their differing opinions on owning exotic animals? Or does it go much deeper than that? I was worried that their compatibility chart (synastry) wouldn’t be indicative of the hatred they have for each other, but astrology did not disappoint…

Square Suns: Indicates a complete inability to understand each other. They’re coming from entirely different places, it feels like they're speaking two different languages. No respect for each other’s life choices. Impossible to find common ground with each other.

Square Venus’: Opposite forms of expression. They disagree on everything because they have no common ground to bond over.

Trine Sun-Saturn: Admiration of each other’s strengths. Carole may dominate Joe which he will have a hard time accepting. Usually indicative of a strong and successful union.

Square Mars-Neptune: They frequently lie and try to deceive each other. This part of their relationship brings out their manipulative sides.

Mars-Jupiter Opposition: They have completely different priorities in life. They may come together to work on a project, but it’s unlikely that they will be able to make it happen and work together.

Mercury-Uranus Opposition: So much tension in this pairing. They have no respect for one another’s ideas and opinions and are constantly challenging each other. No patience for each other.

Square Venus-Lunar Node: Being together brings out the worst in each of them. Their energies don’t react well together.

WOW. These two were born to be enemies. They are actually very similar, which is actually their downfall. They are both extreme, rash individuals who consider themselves a visionary fighting for their cause. Their charts are star crossed and completely incompatible. No wonder they tried to completely destroy each other’s lives! Makes you wonder what you would do if you came across someone you were this incompatible with…

Joe Exotic was born to be in the public eye just as much as he was born to be a controversial figure. The degree of Pisces he was born in is deep-feeling, heavy, and filled with inner demons. He has an intuitive understanding of other people’s energy, and therefore can connect with them easily, making them feel seen and understood. His Cancer moon contributes to his sharp intuition as well as his sensitivity. He already feels so much, so his tolerance for extreme experiences is high. He is destructive, adventurous, and adaptable.

With his Mercury and Mars in Aquarius, his impact on society is important to him. He was destined to take a stand on something bigger than himself, and give every ounce of his personality to it. Aquarians are known for being detached from their emotions and hesitant to express their deepest thoughts and feelings. That energy combined with the immense amount of sensitivity he gets from his Pisces sun and water moon make for a lot of internal struggling. His personality is double-sided, charming and outrageous in front of people then lonely and heavy when he’s alone.

How compatible are Joe and his husbands?

Pretty compatible actually! Joe is a sensitive guy with lots of love to give, he’s just incredibly misguided in the way he gives it. He’s always torn between leading with his heart or his head, and when you pair that with a fiery Mars in Leo, he likely took his internal struggles out on his loved ones.

Like Joe, Carole was also always meant to dedicate her whole life to a singular goal. She has a deep emotional connection to her purpose, and she will do everything in her power to fulfill that purpose. This is another person who lives their life to the extreme. She is charming, malicious, and radical.

Carole’s degree of Gemini sun is powerful, and even dangerous. Either completely misunderstood or vehemently admired, she gives her voice to her cause and has the power to influence change. With this amount of charm, power, and intellect, it’s easy for her efforts to become cult-like and even criminal.

ICant Compete With That Challenge GIF from Icantcompetewiththat GIFs

How compatible are Carole and Howard Baskin?

Square Mercury-Venus: Indicates a lot of arguing. They love to challenge each other with their differing opinions, always trying to prove that the other person is in the wrong.

Square Sun-Uranus: They need a lot of space and freedom from each other. Their relationship is inconsistent and tumultuous.

Square Mercury-Uranus: They need to make an effort to not challenge each other all of the time. Their relationship is prone to tension, impatience, and arguments.

Square Sun-Saturn: Carole wants to live a free and spontaneous life whereas Howard wants to live a quiet, peaceful life. Their differences make them controlling and aggressive.

Mars-Pluto Conjunction: Undeniable sexual attraction. They love to be around each other and their combined energy is passionate.

Trine Sun-Neptune: They are attracted to each other’s minds. They are able to share their deepest thoughts and dreams with each other and they coexist peacefully.

Sextile Sun-Pluto: Amazing passion and sexual attraction. They are drawn to each other in a magnetic way.

Jupiter-Pluto Opposition: They can’t help but want to control each other and change each other’s opinion. A forceful and frustrating relationship.

Sextile Venus-Jupiter: They have a strong desire to make each other happy. They laugh together, support each other, and have a high level of trust in each other. This aspect indicates a lot of understanding and confidence.

Sextile Jupiter-Lunar Node: This aspect makes them feel like they belong together. Amazing intellectual understanding.

Sextile Mars-Neptune: A supportive aspect that is defined by each person helping refine the other’s passions.

My biggest takeaway from looking at their synastry chart is that it’s easy for Carole to control and dominate Howard, especially when you add all of their sexual attraction and passion. Carole’s whole life is dedicated to a single purpose. She considers herself a passionate visionary who can influence others and inspire change. With a Pisces moon and Cancer Mercury, she is able to speak from the heart and put immense feeling into every action she takes and when you combine that with her charming and intellectual Gemini sun, you have one dangerous person. She is charming, mysterious, and powerful whereas Howard is stable, aggressive, and detail-oriented. Carole gives Howard the taste of adventure that he craves, and Howard gives Carole his stability and amazing work ethic.

Did Carole Baskin kill her ex-husband?

Yet again, Astrology did not let me down on this one. Carole and Don were NOT compatible. Their synastry implies that they had an instant connection and meeting of the minds that was destined to fade. In the long-run, their goals and values were going to shift and it was going to tear them apart. Their chart is marked with destructive sexual passion, deception, lies, and frustration.

Sextile Sun-Mercury: They have a respect for each other’s intelligence and a lot in common. A true meeting of the minds.

Square Sun-Jupiter: They feel like they’re on the same page when they first meet, but that feeling quickly fades and they grow apart. Destined to fall out of love.

Mercury-Venus Conjunction: They love to share their deepest emotions with each other.

Sun-Neptune Opposition: Carole will feel used and frustrated. Don is prone to lying to her and their relationship is wrought with unfulfilled promises. They can’t see each other clearly and they project their own issues onto each other. Don can’t live up to Carole’s standards and expectations.

Square Mercury-Saturn: Don is critical of Carole and Carole can’t stand to be belittled by him.

Trine Mars-Jupiter: They make each other feel excited and confident. They are able to plan together and bring those plans to fruition.

After I watched the show, I had developed my own theory that Don faked his own death and fled to Costa Rica because he was concerned that Carole would divorce him and take his money. Now that I’ve done their compatibility chart, I’m not so sure. Not only are they incompatible, their relationship pushed them to become the worst version of themselves. It seems like they were instantly attracted to each other, but that passion quickly turned into anger and resentment. Don was pushing Carole into a corner, trying to control her and she couldn’t take it anymore. So did she kill him? While I can’t say anything for sure, if there’s one thing I learned about Carole Baskin’s chart, it’s that she will destroy anything that gets in the way of her ultimate goal.

Whether On Purpose Or Accidentally Roll Eyes GIF from Whetheronpurposeoraccidentally GIFs

Bottom line is, these people are CRAZY. Crazy cats and kittens. I hope you enjoyed taking an astrological deep dive into the madness! What was your take on these characters? Do you think Carole killed her ex-husband? 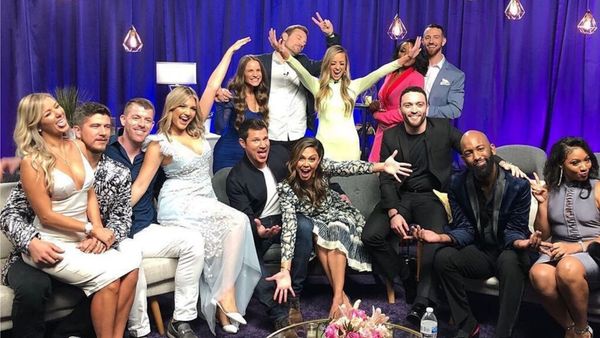 I looked at the astrological compatibility of the final 6 Love is Blind couples and the results are more disappointing than Kenny and Kelly's wedding.via GIPHY Astrology doesn’t care what you